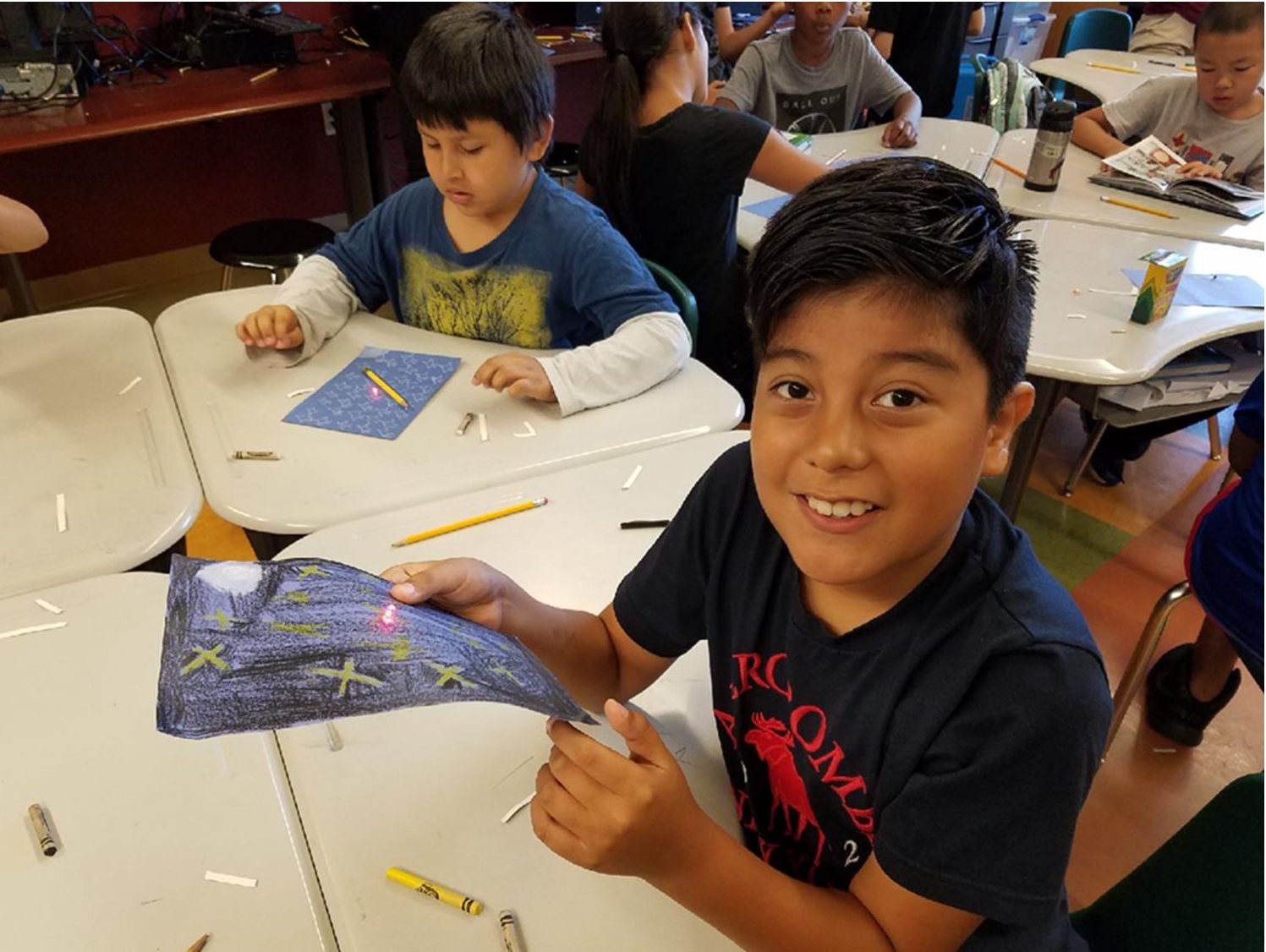 Fab Lab Houston was very busy last week! Furniture and equipment showed up every day and is being assembled just as quickly as it arrives. Each day we are getting closer to our opening and the excitement is building with each table assembled.

We have also been going to the BakerRipley Community Centers to present the second of three activities to the summer campers. This week the campers have been learning about the solar system and outer space, what a perfect time to introduce them to constellations using Paper Circuits!

Paper circuits have quickly become a program staple for us. Since Fab Lab Houston isn’t open yet, we have been searching for open-ended, portable activities that can be used on a variety of ages. The concept of paper circuits is an easy one; connect mini LED lights to copper tape, and power them with cell batteries. The simplicity or complexity of the project can be adjusted depending on your audience. 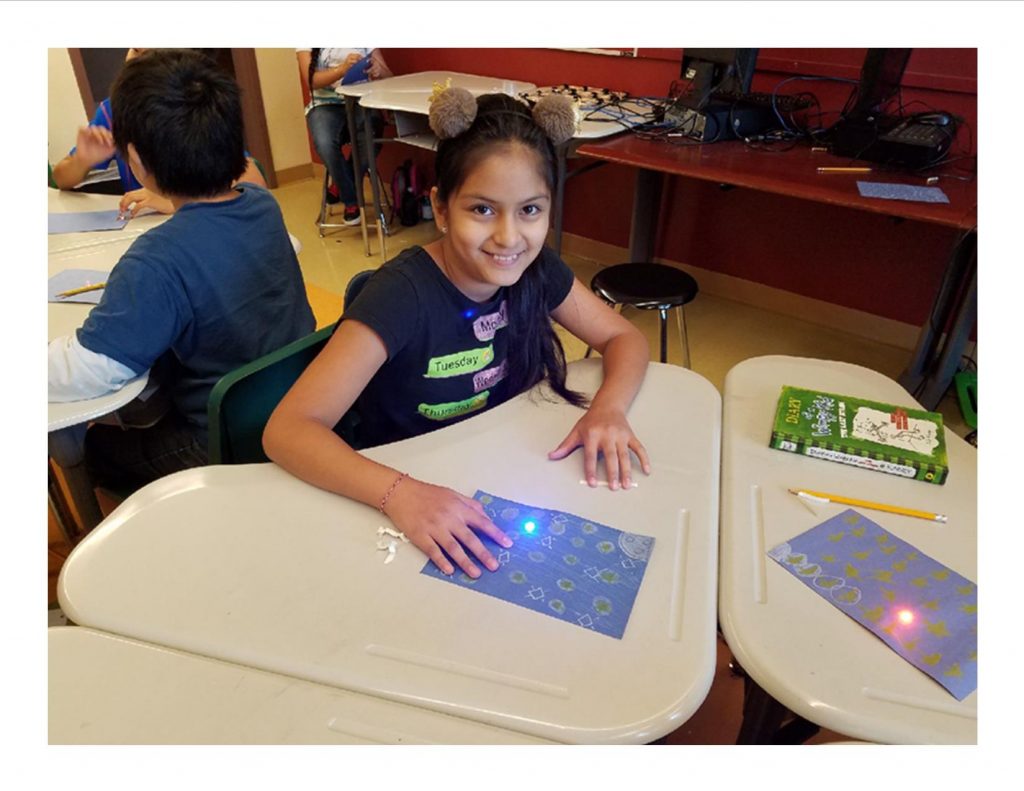 For younger audiences we have discovered it is best to use mini LED lights and focus on that one light being a special or North Star. Older groups have used surface mount LEDS to make constellations. The difference between the two lights is that the surface mount LEDS take more prep time and are difficult to make a connection sometimes, making their use more time consuming. The mini LED lights are essentially plug and play with two leads, one positive and one negative that can be attached directly to the copper tape. The surface mount LEDs, being smaller require less energy and you can connect multiples, up to six to one small cell battery. The same cell batteries can only power 2 of the mini LEDs at one time.

From a teaching perspective it has been fun adjusting the workshop based on age, giving us an opportunity to see what ages and groups work best for each activity. We have found that 8 years old is about the cut off for using the surface mount LEDs. Groups that have fewer than 15 participants, unless an additional teacher is available, are the ideal size for the surface mount LEDs.

Today’s blog will be focused on teaching with the mini LED lights. I usually start the class by asking the students what they see in the sky when they look up at night. The typical answers are stars and the moon, but I have heard airplanes, space shuttles, cupcakes, and my dog for answers as well. I like to point out that not all the little bright spots you see in the sky are not always stars, sometimes they can be planets as well. Each student is given a half sheet of dark blue paper to draw their night sky. I have also seen this interpreted in a few creative ways, from just stars and a moon to a house and trees with the stars above it, to rainbows, the sun, and clouds. If another student tells a child with the sun on their paper that they are wrong, I like to use that as a teaching opportunity. Just because we can’t see the stars during the day doesn’t mean they are gone. The stars are out all the time, but during the day they aren’t bright enough for us to see because of the brightest and closest star in the sky, the sun. 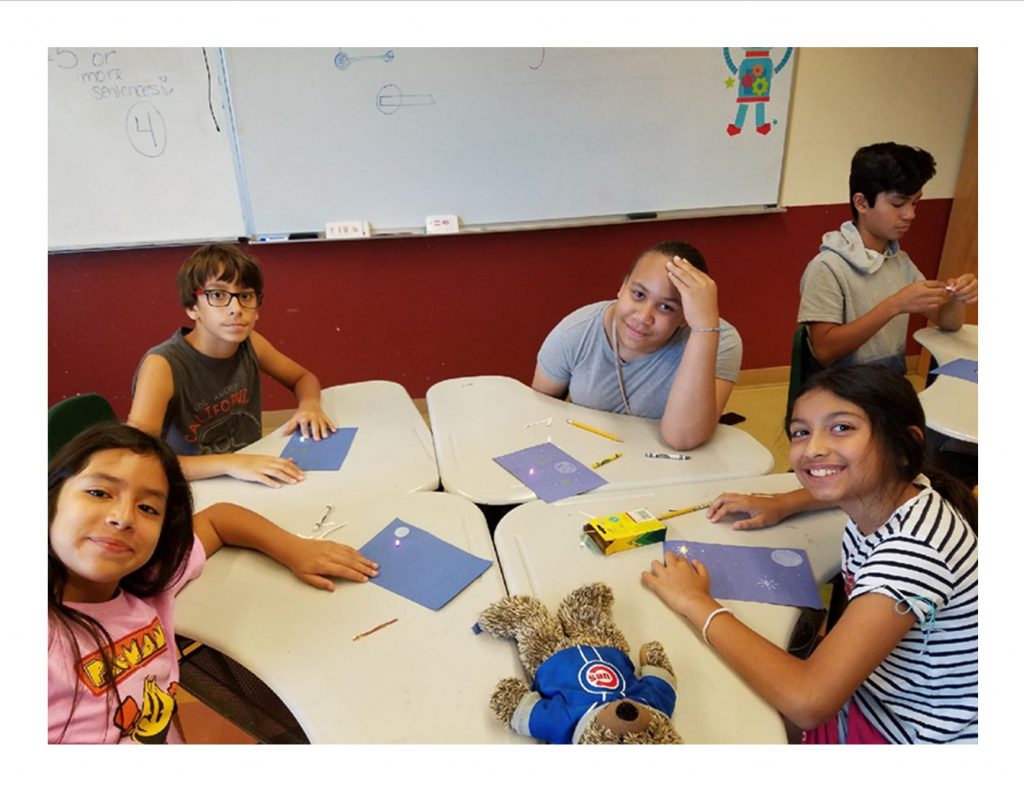 Once they students have drawn their picture, they are asked to identify where on the paper they would like to place their light up star. Each child is given a pencil to poke a hole in the paper for the lightbulb to shine through. It is time for them to turn their picture over. Each child is given a 5” x .25” copper tape strip to cut in half. They are then instructed to place each half parallel to the other on either side of the hole made for the lightbulb. The leads of the LED bulbs are bent off to the side, so they create a bridge that will connect the two copper tape strips. Place the LED bulb in the hole, then to keep the leads in placed, cover with small pieces of copper tape. Now it is time to connect the battery. Another small piece of copper tape is used to connect one side of the copper tape on the paper to the battery. Now, the battery will be run to the other side of the copper tape, completing the circuit. If the bulb does not turn on, change the side the copper tape attached to the battery is on, as the positive and negative sides must match. 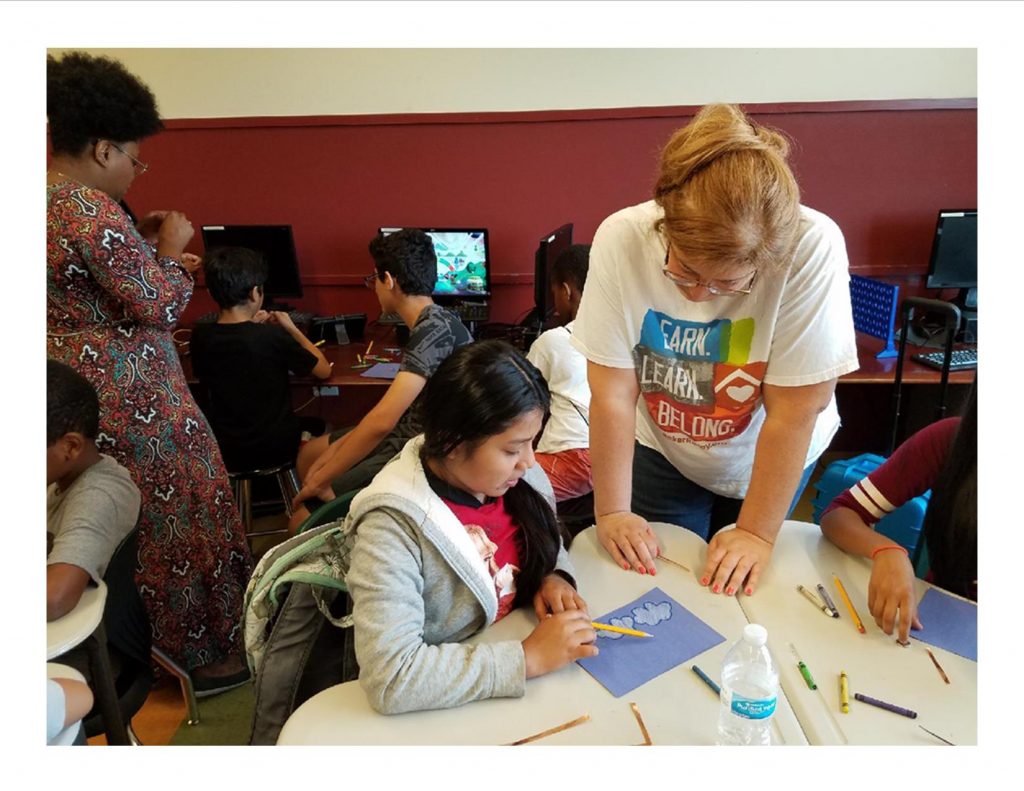 Let the students know to turn their star on, they push the battery down on the copper strip, and to turn it off, they bend it back and away from making the connection.

The yells of delight and excitement as the students get their bulbs to turn on are great. The “Ah-ha” moment is there as they are trying to figure out how the battery will power the bulb, playing with the connections on their own while waiting for the instructions.

It has been wonderful supplementing the BakerRipley Young Leaders Summer Camp activities this year, and I look forward to our last session where we will introduce the students to MakeyMakey kits. I can’t wait to see the creative ways they use them.