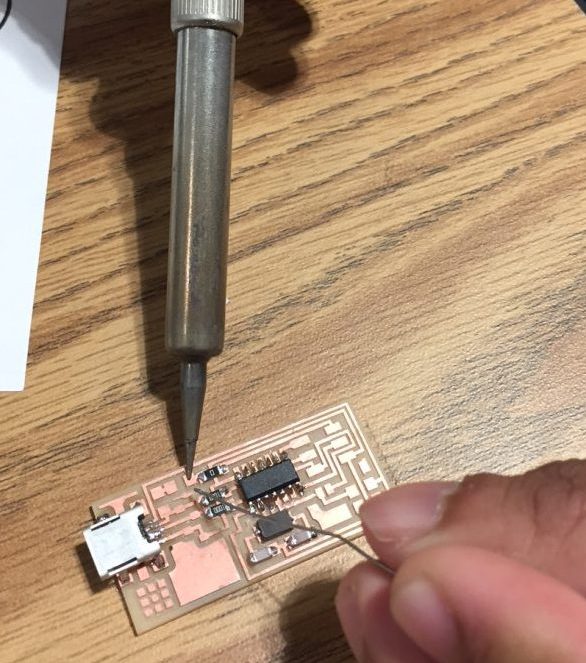 I had an opportunity to attend the Chevron Fab Lab Convening last month which focused on introducing all the Fab Lab Managers to new methods of digital fabrication.

One of the workshops showed us how to cut circuit boards using a milling machine, as well soldering electronic components to them. The large group was divided into 3 smaller groups, and gave us enough time go through the process of making or milling the circuit boards, soldering the components on there, and programming them at the end. 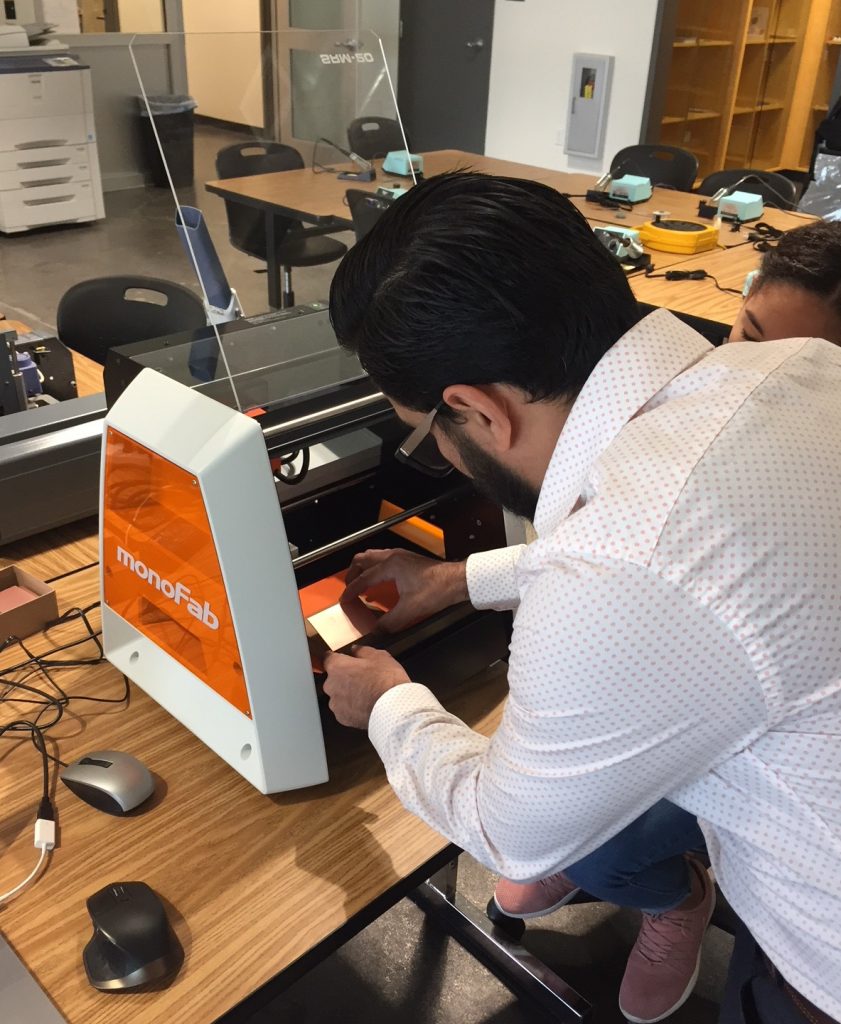 The milling process was new to me since I had not used the Roland SRM-20 mini mill before. I learned that there are many applications that can be used with the mini mill, from engraving to milling molds. The method of how the boards were going to be cut seemed to be straight forward. The standard procedure to begin cutting was by placing the “blank” copper clad board in the lower left corner and zeroing the machine. Once that was done, the board is ready to be cut. The design program was already done and just needed to be uploaded to the milling machine. It was nice to have a large group working on the space project because even Fab Lab staff run into problems the first time they try to learn something new. One of the issues that occurred during this process was that one of the sensors on the door was activated due to being opened. Once the sensor was triggered the machine stopped because of safety precautions and we had to start over. We learned not to open the door for progress checks or a mid-cut vacuum. After some trial and error, we successfully made the board and were then ready to get the soldering process started.

I knew all the electronic components by name resistors, capacitors, diodes, micro-controllers, and LEDs but I had never used them in this way. The process of soldering together such small parts to a board that is  1”x2” was a bit intimidating. First, I began by figuring out the orientation of the board, how it was “mapped out” and the placement of each part before I started to solder. While soldering, I used tweezers and a device that had a magnifying lens with alligator clips to hold the small pieces. I don’t have the steadiest hands so soldering at first was a bit difficult, which just meant I had to be very careful about making sure that all the connections were soldered properly and that none of the solder points were touching so it wouldn’t short circuit. My confidence grew with each component I soldered and I could see the circuit board starting to take shape. 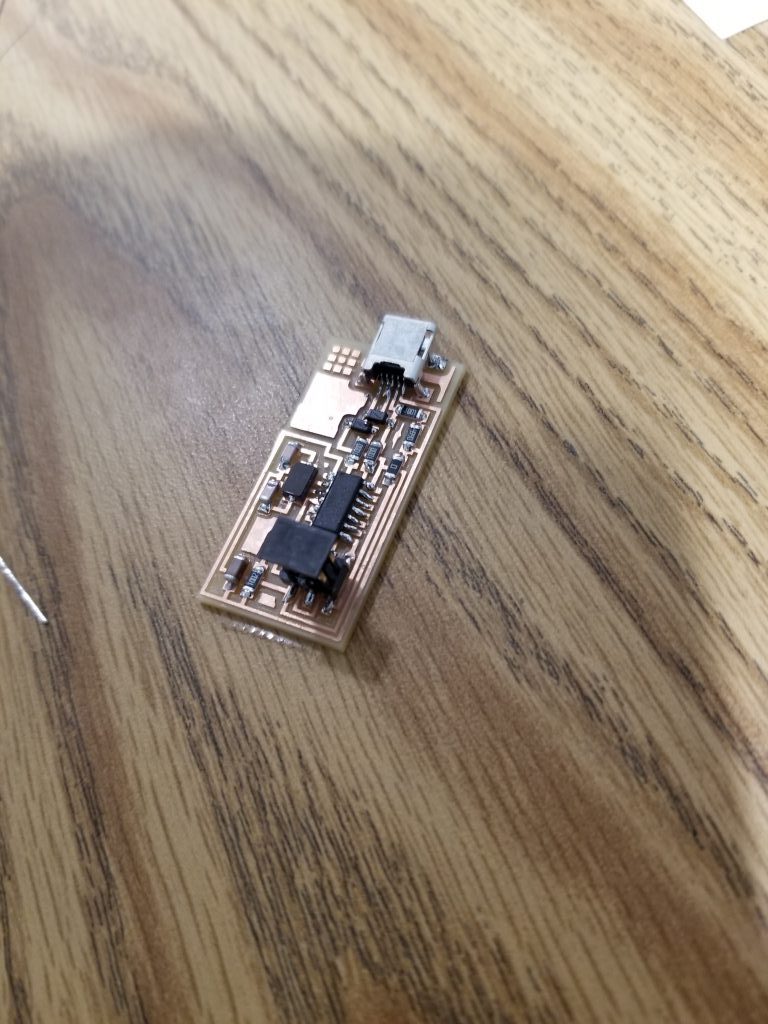 We were able to build our own Arduino board on day two of the workshop. We learned how to make our own board for about $5 instead of spending roughly about $20 to purchase one. Besides being more cost efficient, it’s also a way to learn what each individual part is and where it goes. Seeing this process is like getting the inside scoop on how it works rather than just unboxing it and plugging it in. This board was much easier to do in comparison to the first one. For me, it was simply about getting into the zone where soldering became a flick of the wrist. It was a big plus having others around to help show me how to fix soldering mistakes. 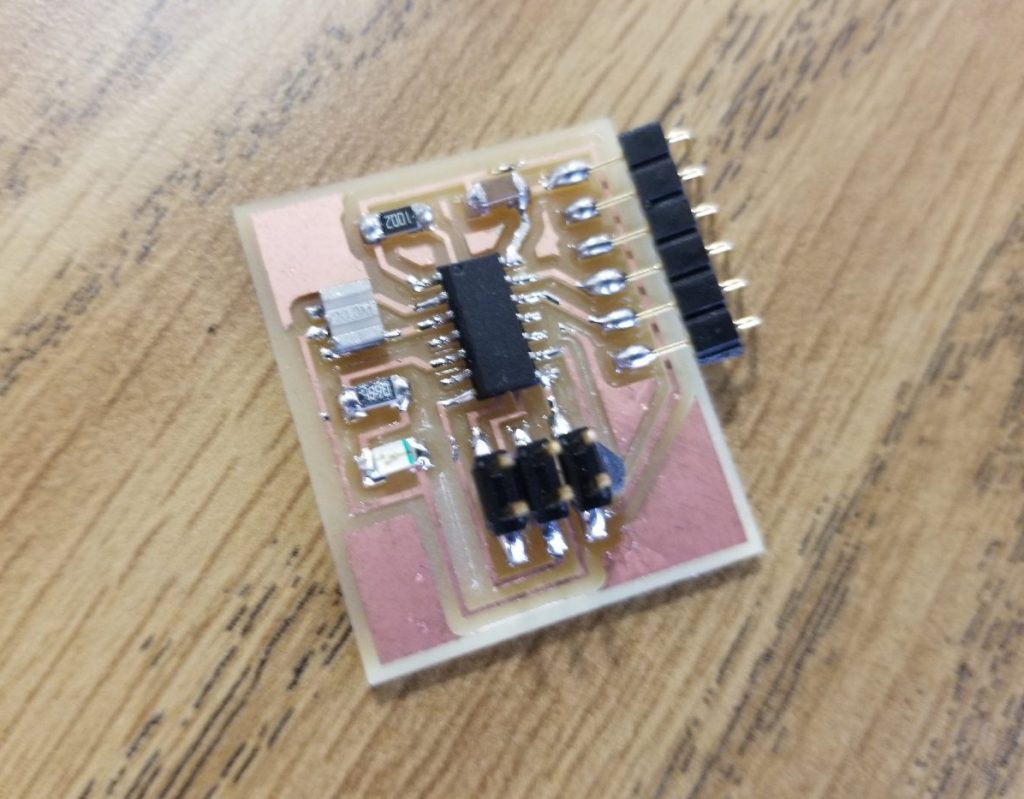 Having overcome the intimidating process of solding the circuit boards I was ready to program the boards. There were some difficulties programming the boards. After several attempts of connecting it to the computer, the board was not responding to the program. Without knowing what the issue was, we checked the code and didn’t find any issues. Turns out, I needed to re-solder one of the parts because two solder points were not making contact, causing it to not respond to the computer’s commands. With the help from some colleagues, we went through the process of programming the boards and managed to get them to work.

From beginning to end, I was amazed by the process. It is always fun to learn a new skill. I started with few experiences tinkering with electronics but I now feel more confident in my ability to help others build circuit boards. With this new knowledge and more practice, I look forward to helping people troubleshoot thier projects when Fab Lab Houston opens.