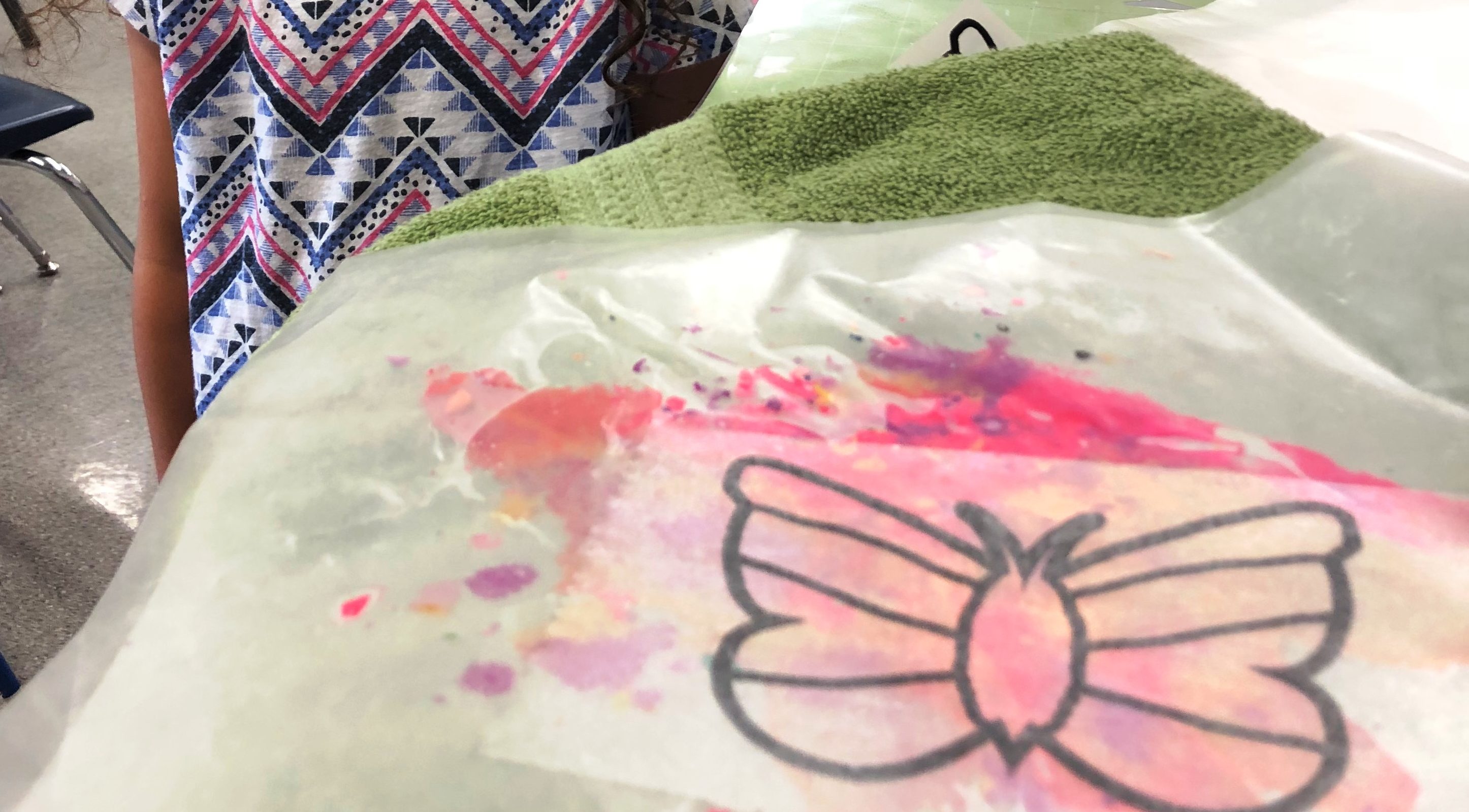 Fab Lab Houston is moving closer to our opening this summer. In the meantime we are keeping busy by bringing programs to our community. Last week we kicked off a science summer learning series with BakerRipley’s summer camp program. Over the next 11 weeks we will be visiting four summer camp locations bringing fun STEM activities to their elementary and middle school campers. 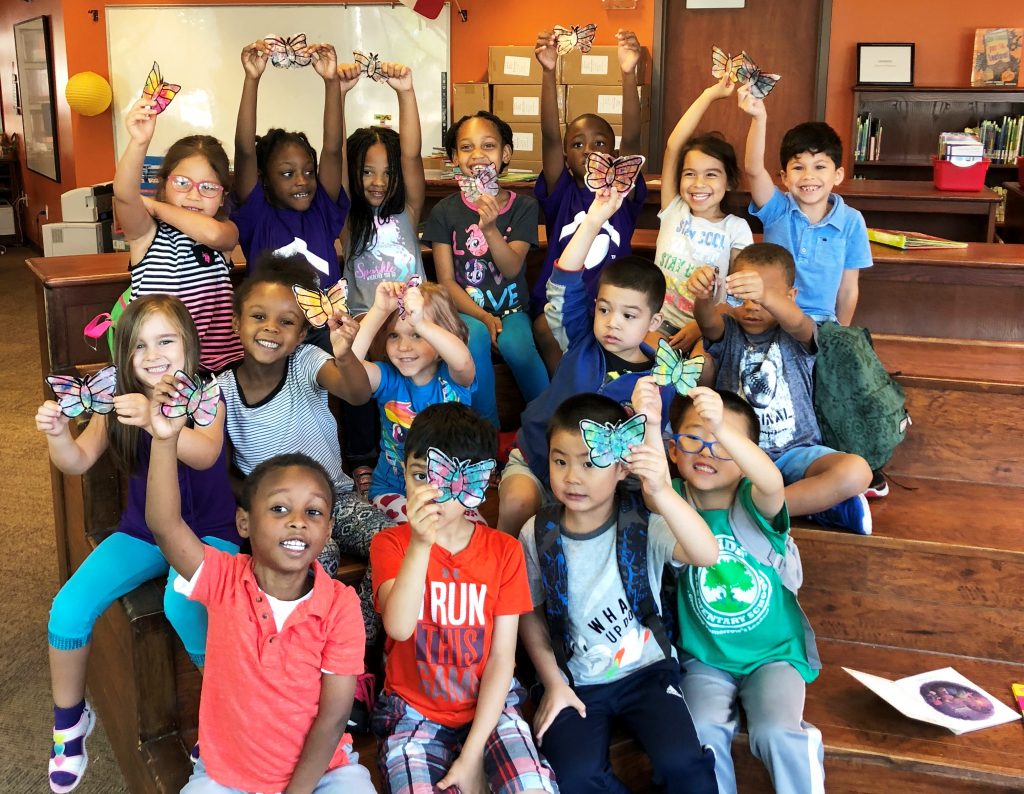 Fab Lab Houston’s first visit was during the weekly theme “Let It Grow,” during which the summer campers were learning about how things grow.  They have cocoons in the classroom growing into butterflies, seedlings sprouting, and a new found knowledge of the essential things needed for all things to grow. We were excited to bring in an activity that continued to expand their knowledge. 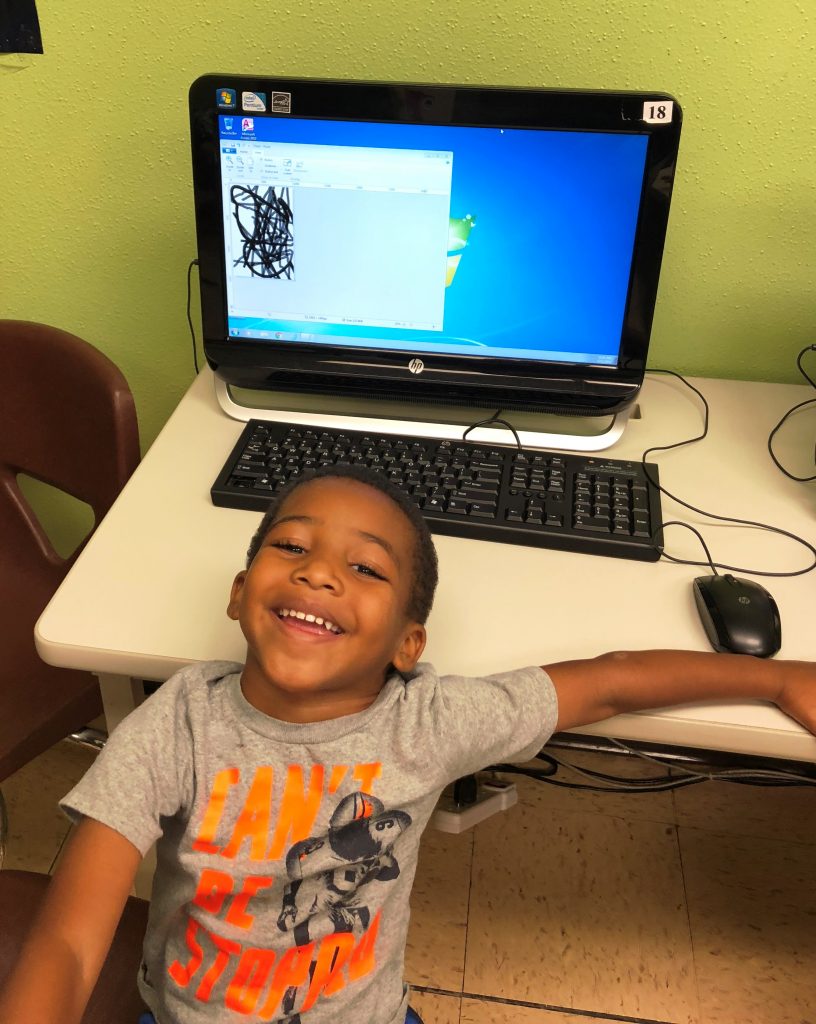 The activity decided upon was a familiar one, with a modern twist; stained glass butterflies made by melting crayons between two layers of wax paper. Typically for this activity the children cut the shape of the butterfly out of black construction paper to be the frame. With the Fab Lab we were able to use a vinyl cutter to make the black frame, allowing for more detail in the butterfly, and less mess as no glue was involved.

To get the activity started each child was at a computer with a half image of a butterfly on it in Microsoft Paint.  During the introduction we spoke about how butterflies are symmetrical.  The children were then instructed to use the marker tool to make lines on their butterflies, with a picture of a monarch butterfly used as an example. The children then used the ‘select’ and copy tools to move their image over to Microsoft Publisher. In publisher they pasted their half butterfly image twice and then shown how to rotate the image vertically.  They were then able to move the images around to match them up perfectly and make a symmetrical butterfly.  Once we had the image saved as a PDF we imported it to the Cricut Design Space software to prepare for printing on black vinyl. Our butterflies were on the small side, about 4” x 5.” Once the butterflies were cut out on the cutter, we pulled out the parts not needed, leaving just the outline and drawn in lines to be covered with the transfer tape. 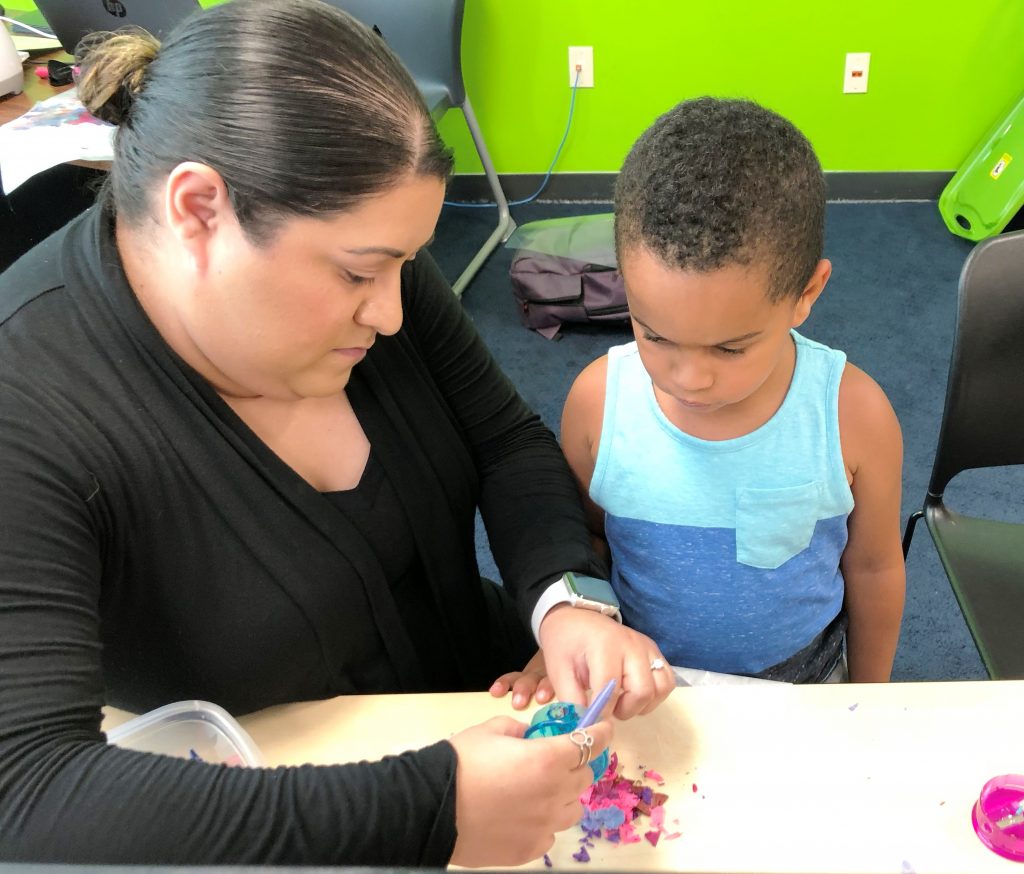 After getting the butterfly outlines done, it was time to work on the ‘stained glass’ part of the project. Each child was given a piece of wax paper and a hand-held pencil sharpener. They were then told to choose 3-5 different colors of crayons from a box. The crayons have had their paper wrappings removed already to save time and mess.  During the testing process it was found that using Crayola brand crayons for this activity is really best, other brands don’t melt evenly and tend to look powdery once they cool.  Students won’t need a lot of crayon shavings for this activity, maybe a total of a tablespoon’s worth in the middle of the wax paper, spread in a thin layer.  Once they have enough, take their wax paper with the shavings to a separate area for melting. Place the wax paper with shavings on your work surface, and cover with another piece of wax paper. Using a regular household iron on a medium setting will be best for the melting process. I cover my work area with a towel to insulate from the heat and more importantly to protect it from any melted crayon that might sneak out around the edges. I also use a thin kitchen towel on top to keep the wax paper coating from getting on the iron.   Press the iron down on top of the towel to start melting the crayons. If they aren’t spreading out well as they melt, press down on the iron harder, pressing towards the edge of the wax paper as you go. 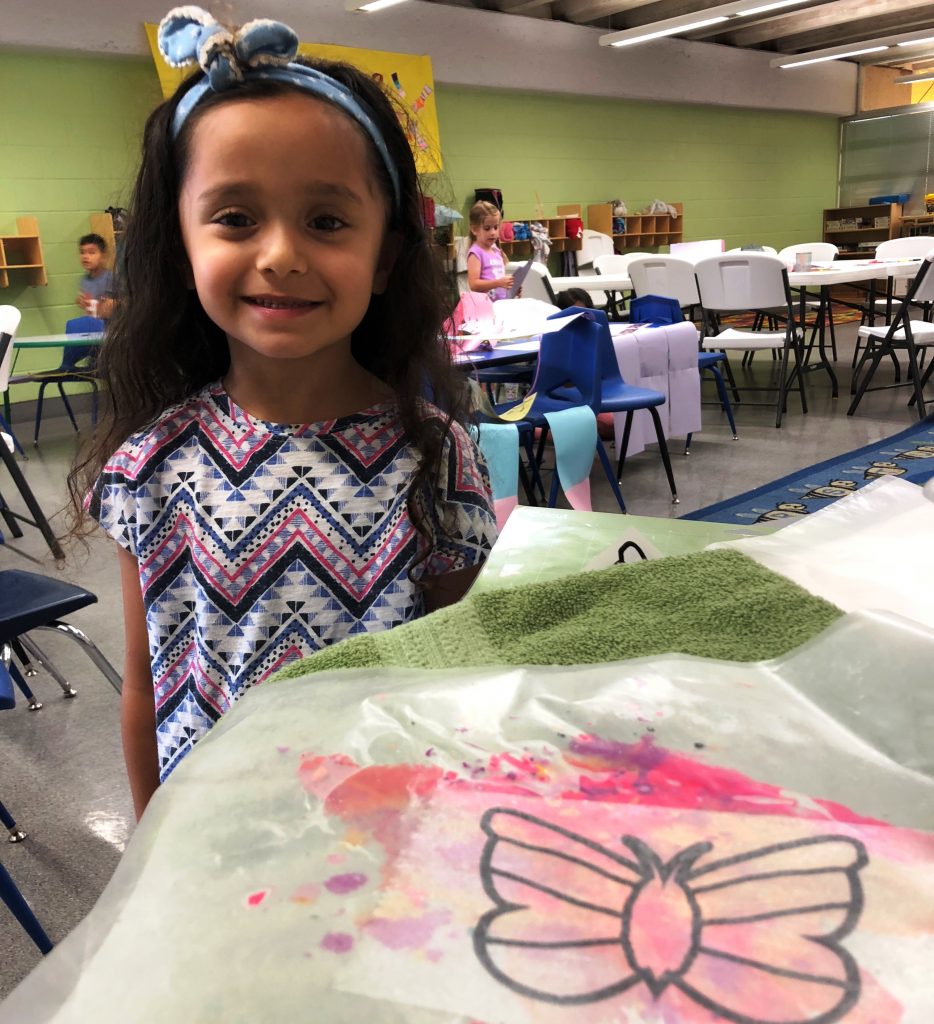 It doesn’t take long for the crayons to cool so the project can be finished.  The area of the melted crayon will most likely be larger than the vinyl cut out, so let the children choose the area for their butterfly to be placed. Some children needed help peeling the vinyl backing off and placing the butterfly on their wax paper.  Be careful when removing the transfer tape to not tear the wax paper. Once the transfer is complete, give the students scissors to cut around the outline of the butterfly.

This project was done with 4 – 7 year olds.  I found during the process that while all ages had fun, the 6 and  7 year olds were best at doing this project somewhat independently.  One of the keys is to have the children use the large side of the pencil sharpener for the crayons. Also, have something small on hand to dislodge the broken crayon tips from the sharpener as you will be doing that a lot. 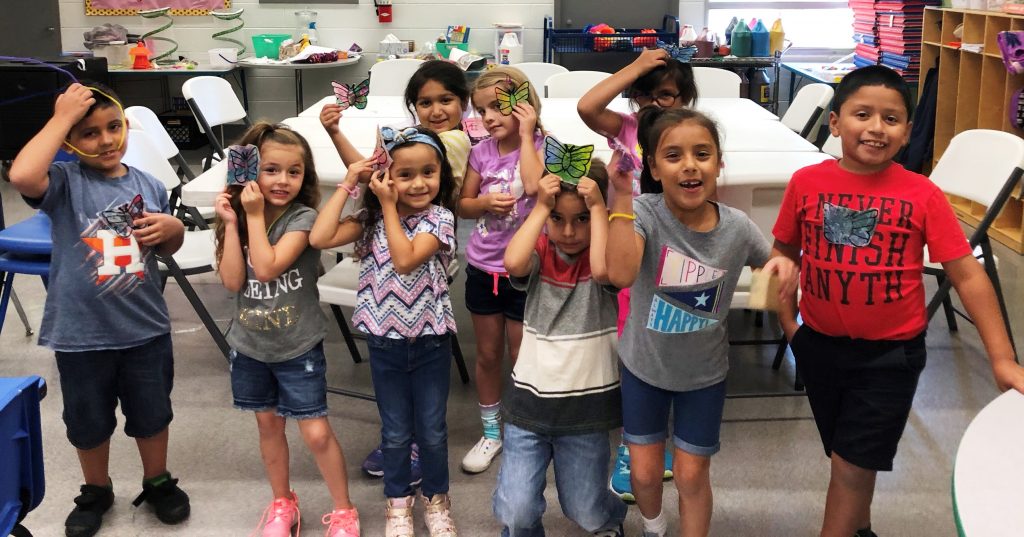